The Around-the-World Traveller from Westerwald 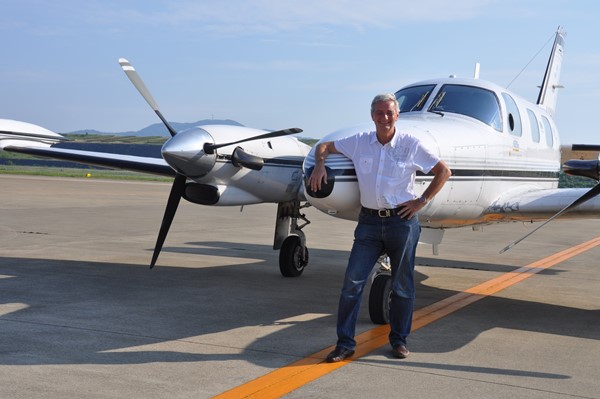 Reiner Meutsch (born 1955) has turned his passion for travelling into his  profession. Being the son of a successful bus tour operator from the Westerwald region, he joined the family business in his mid-twenties. However, he was more interested in travelling by air than by road. He and his partner Klaus Scheyer took over the tour operator “Berge & Meer” (“Mountains & Sea”) in 1989 and they became the market leader in direct travel sales.  For more than 25 years now, he also hosts Europe's most-listened weekly radio travelling broadcast “Mein Abenteuer” ("My Adventure) at the radio station RPR1. The show portrays people who have experienced exciting adventures all over the world.

In 2009, he remembered his father’s dream, to travel the world when he retired. He died at the age of 58, without having seen the world. Reiner Meutsch decided to realize his life's dream in time. He sold his company shares and passed the pilot's license to travel around the world in a small plane in 2010. He travelled to 77 countries. To make the trip worthwhile, he wanted to support and visit 5 education  projects. This was the beginning of FLY & HELP’s work. Since then, his new goal in life has been to help  children to  receive education.

Reiner Meutsch travels with his own sports aircraft whenever possible. Since he was a teenager, flying has been his passion: "As a teenager, I really wanted to fly helicopters. During my military service in the Bundeswehr, I even began training as a helicopter pilot. Professionally, I started a different career, but the fascination of flying never left me."

His professional career and his passion for flying took Reiner Meutsch around the world.  He gained a lot of insight into the lives of people in various countries. "Some encounters have touched me deeply. In face-to-face conversations, people told me how different their lives would have been if they had had access to schooling. This gave me a desire to make a difference and to change things," says Reiner Meutsch.

All donations go exclusively to the aid projects supported by FLY & HELP. Travel and administrative costs are paid by Reiner Meutsch himself or by sponsors.